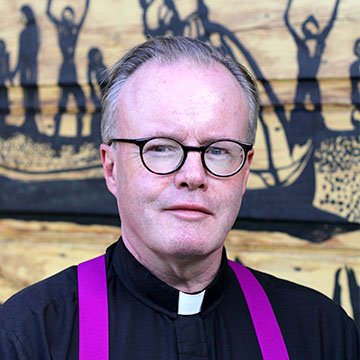 Father Benedict Kiely is a Catholic priest, incardinated in the Personal Ordinariate of Our Lady of Walsingham. Born in London, and ordained in Canterbury, England in 1994, Father Ben has spent most of his priestly ministry in the United States. In the summer of 2014, Father Ben perceived a call to devote his entire priestly ministry to aid and advocacy for persecuted Christians, especially in the Middle East. Founding Nasarean.org, a 501 (c) 3 charity based in Stowe, Vermont and with the permission and support of his Ordinary, Father Ben divides his time between the US, UK and the Middle East, speaking, preaching and writing, trying to focus attention on the plight of persecuted Christians around the world. He has visited war-torn Iraq on multiple occasions since 2015, and has visited Syria and Lebanon where Nasarean is now supporting a number of family businesses.

Father Ben has appeared numerous times on national radio and television, including Fox News, the BBC and international podcasts. A noted writer, formerly the US columnist for The Catholic Times, Fr. Ben’s work has appeared in, among other publications, The Saint Austin Review, The American Conservative, The European Conservative, The Daily Caller, Real Clear Politics, National Review, First Things, The Catholic Herald and Crisis.

He has appeared multiple times on EWTN and Fox News, BBC television and radio to speak about the plight of persecuted Christians. He regularly speaks to gatherings of concerned Christians in the US and in Europe to educate and provide leadership about the situation of the persecuted Church and is often asked to speak at international conferences and gatherings.